Do You Want To Climb Uluru? Should You?
Please Make An Informed Decision.

Climbing Uluru Is Not Allowed Any More

On October 26, 2019, to coincide with the 34th anniversary of the return of Uluru to traditional owners, the ban on climbing Uluru came into effect.

See the bottom of this page for more details.

The content on this page was written years prior and remains here to illustrate how controversial this climb had always been.

Climbing Ayers Rock has become a controversial thing to do.

You may or may not know that the Aboriginal owners of Uluru prefer you - and ask you - not to climb Ayers Rock...

(It's amazing how many people arrive every year to climb Ayers Rock without the slightest idea about any of the issues surrounding the Uluru climb.)

With this page I don't want to tell you what to do. I just want to enable you to make an informed decision about climbing Ayers Rock.

Whether you climb Uluru or not is up to you, and you are more than welcome to share your own thoughts or Uluru experiences here. 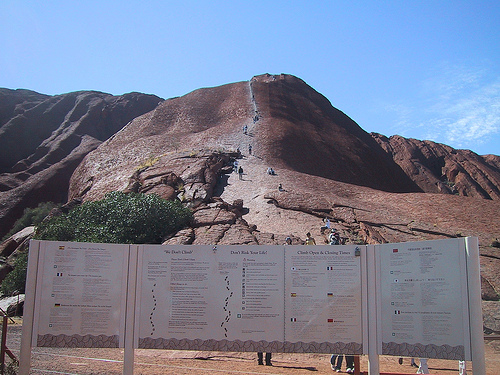 The sign is a message from the Aboriginal owners, asking people to please respect their culture and not to climb. Photo by Melalouise.

About The Uluru/Ayers Rock Climb

Let's start with some facts about the climb itself.

Ayers Rock is 348 metres high (that's a 95 story building). The climbing path is about 1.6 km long and can be treacherous. The first part has a chain to hold on to.

It is a very strenuous climb (most of the over 35 deaths at Ayers Rock were due to heart attacks) and takes about two hours to complete. If you are fit I'd say half an hour up, half an hour across the top, some time spent up there and the way down.

If you aren't fit you shouldn't even consider it. (That challenge is one of the reasons so many people cannot resist climbing Ayers Rock.) 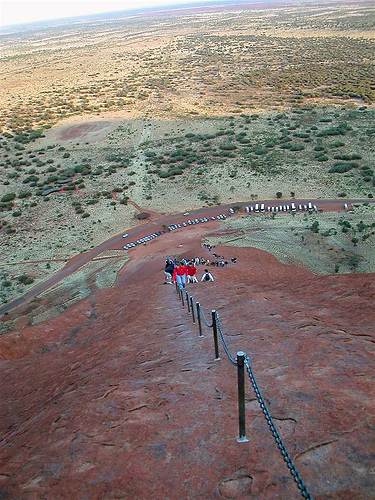 The Ayers Rock climb is often closed because of strong winds or high temperatures. If your main reason for visiting Ayers Rock is climbing then you may end up very disappointed.

The reports of people who climbed Uluru are mixed. Many say it's not worth it, and that the views are boring since you're standing on the only point of interest in an otherwise featureless landscape (except for the nearby Olgas/Kata Tjuta). See the short video (not mine) filmed from the top:

Other visitors insist that climbing Ayers Rock and standing at the top of Uluru is the most exhilarating, cherished and memorable experience of their whole Australia trip.

Either way there is no doubt that Uluru's main attraction for tourists is the climb. For many people a visit to Ayers Rock is synonymous with climbing Ayers Rock, and the climb is their only reason to make the pilgrimage.

In a nutshell: Ayers Rock is a sacred site and the Aboriginal owners ask you to respect their law and not to climb it. The official "Please Don't Climb Uluru" message from the Government site gives two reasons for their request:

It seems quite simple, so why is climbing Ayers Rock such a controversial issue?

One of the main reasons is that most tourists who arrive at Ayers Rock have no idea about this. The tourism industry still doesn't draw a lot of attention to the fact that climbing isn't exactly encouraged. The market demands it, people want to climb, and since there is no law against climbing Uluru Ayers Rock tours will continue to feature the same popular offerings: sunrise, climb, sunset. Hey, we're talking about money...

So the first time many tourists hear, "Please don't climb Uluru" is when they read their entry ticket to the Uluru-Kata Tjuta National Park. At that point they have travelled thousands of kilometres and spent hundreds of dollars to get here, and the main purpose was to climb Uluru... I can understand their disappointment and the decision to ignore the wishes of the traditional owners.

The other reason is understandable, too. Climbing Ayers Rock is after all still perfectly legal. So why not?

Here are some typical reactions from tourists (found on their travel blogs):

Please think about it: does the entry fee to a museum or art gallery entitle you to do to the exhibits whatever you please? You are not buying rights to Ayers Rock. What you are paying for is the upkeep of the facilities, the visitor centre, the roads in the park etc. If it seems expensive consider how far you've just driven/flown. It costs money to make it convenient for you to visit. Everything needed here has to be transported over huge distances and that costs money.

Tour guides first and foremost have to make sure you enjoy yourself. If you want to climb Ayers Rock they make sure you feel good about it. It's about customer satisfaction and ultimately about money.

That the Uluru climb remains open for tourists was a condition when the Aboriginal owners received the title to the lands in 1985. And here is another important point to consider:

Well, for many it's not simple at all as it turns out. The last quote was taken from a discussion on a travel forum. It is a very good discussion and I think it addresses all the different opinions on climbing Ayers Rock very well. Below are some more excerpts and the full discussion is here: Climbing Uluru (Ayers Rock)?


In case you are curious where I stand: to me hardly any of the hotly debated points matter. The way I see it I am on someone else's land and therefore respect the owner's wishes.

You may arrive at a different decision and I respect that, too. It is your decision to make. If you decide to climb Uluru please be careful.

The criteria for closing the Uluru climb were established back in 2010. The Uluru-Kata Tjuta National Park Management Plan 2010-2020 states that:

"The park will be permanently closed when:

Do note the "or" in the above wording. Only one of these criteria needed to be met to make it possible to close the climb.

Additionally surveys by Parks Australia (also from 2013 and earlier) showed that 98% of people would still visit Uluru, even if the climb was closed.

You'd think that with that at least two of the above criteria had certainly been met. But still, it took another four years for it to finally happen.

October 25, 2017 a historical vote took place and the decision by the Uluru-Kata Tjuta National Park board was unanimous:

Climbing Uluru will be banned!

The ban will begin on October 26, 2019 to coincide with the 34th anniversary of the return of Uluru to traditional owners.

So, if after reading and digesting all the above information you still want to climb Uluru, you have until October 28, 2019 to do so.

Travelling to the Northern Territory?

NEW! Destination Red Centre is the latest addition to the popular Destination series. Monica Coleman takes you through Australia's red Outback heart, offering all the detail and insider tips that you have come to know and love about our Destination guides. With special emphasis on Aboriginal communities and culture.

A must have if you travel to or from Alice Springs/Uluru.

Destination Top End offers the same comprehensive, detailed insider information for the tropical regions of the Northern Territory. Be the best informed traveller in the Kakadu, Litchfield and Katherine Gorge national parks and beyond!

A must have if you travel to or from Darwin.


Travelling to the Kimberley?

The FREE Kimberley Pocket Guide
is available from my other website. It is a great introduction to travel in the Kimberley region and along the Gibb. This free resource will answer all the questions you might have in the early stages of planning a trip.

Destination Kimberley
The guide book that started it all! The full Kimberley travel guide shows you how to make the most of your adventure at Australia's last frontier. Destination Kimberley includes the most detailed and most current guide to the Gibb River Road available anywhere. Also called "The Bible" by its readers.

SUBSCRIBE ABOVE
TO RECEIVE YOUR FREE 70-PAGE OUTBACK GUIDE PLUS!
THE BRAND NEW
RED CENTRE GUIDE 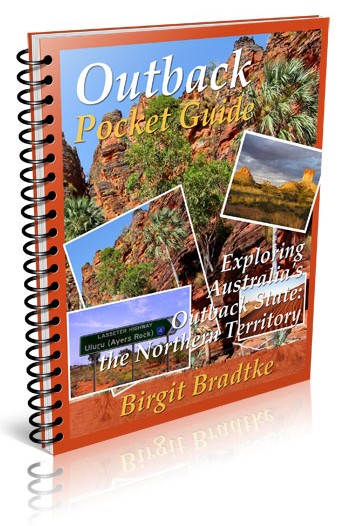 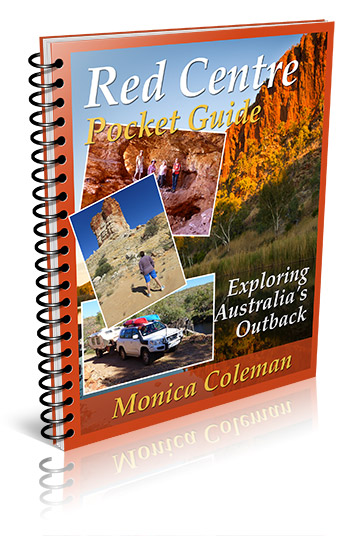 DESTINATION RED CENTRE, THE LATEST ADDITION TO THE POPULAR DESTINATION SERIES, COVERS THE OUTBACK AROUND ALICE SPRINGS AND ULURU.

DESTINATION TOP END, YOU NEED THIS IF YOU ARE TRAVELLING TO OR FROM DARWIN. 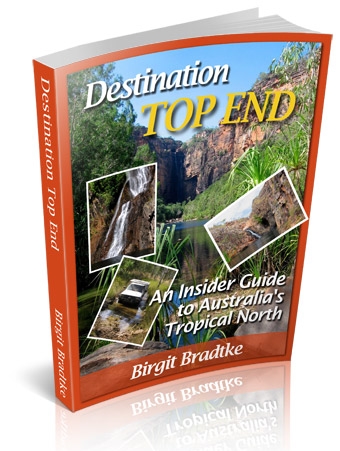 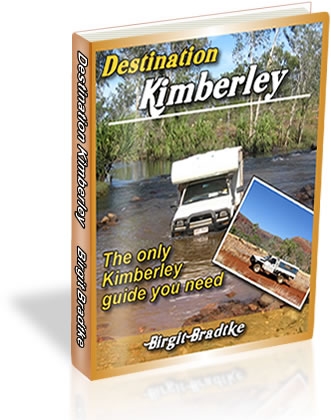 This site uses British/Australian English, as that is what Australians use.
Words like for example "travelling" or "colour" might look unfamiliar to you.
They are nevertheless correct!